My kitchen cabinets are full of bottles of spices. I like to store these things as you never know what might come in handy for a recipe. Yes, having a well-stocked spice cabinet, is a rather good feeling, especially when you can pull out something at the crucial moment when you need it the most.

If you have ever walked down a store aisle with neatly stacked rows of Indian spices of all sizes, shapes and colours and wondered what they are used for, I don’t blame you. Anyone knew to Indian cooking is bound to be overwhelmed at the number of spices we use in our India kitchens.
Layering many contrasting flavours and spices is at the heart of Indian cooking. Spices not only add beautiful flavour to Indian dishes, they also make each dish distinct and wonderfully aromatic. The use of spices varies by region in India and sometimes you can just smell a dish and know where it’s from. Each spice by itself imparts a striking flavour, but when used together with other spices, the different combinations and permutations magically change the individual characteristics.
The use of herbs and spices has been incredibly important throughout history. Many were celebrated for their medicinal properties, well before culinary use. In this respect, the health benefits of Indian spices have been well documented in several medical journals and publications.

If you’re a beginner Indian cook or just want to try out a few Indian recipes at home to add variation to your dinner table, I suggest that you start by buying a few essential Indian whole spices. To help you with this task, I have provided below the 5 whole spices I think you should start with. These are the basic ones and readily available at most grocery stores like TESCO, ASDA, Waitrose, Sainsbury’s, or Costcutter. Holland and Barrett also stocks these spices under the label of ‘The Vital Ingredient.’

There are several other spices too but are used more sparingly. I have used this blog post to discuss the whole spices only. There will be another post about the powdered form of spices that you should keep handy. 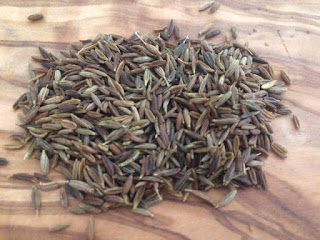 Cumin is the seed of a small plant. The seeds themselves are crescent shaped and lend a warm pungent flavour to dishes. While cumin seeds are a staple in a lot of Indian food, they are also used in Middle Eastern, Spanish, and Mexican cooking. The seeds pair well with lentils, vegetables and meat.

Cumin is a great source of iron and calcium and considered good for digestion and related disorders. 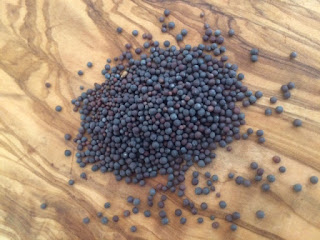 Mustard seeds come from the yellow flowers of the mustard plant. The seeds are small and round and come in a variety of colours, black, brown, yellow. The black mustard seeds are quite commonly used in Indian cooking and have a lovely nutty flavour.

These seeds are an excellent source of essential B-complex vitamins such as folates, niacin, thiamin, riboflavin, pyridoxine (vitaminB-6), pantothenic acid. They are also a rich source of health benefiting minerals. Calcium, manganese, copper, iron, selenium, and zinc are some of the minerals especially concentrated in these seeds. 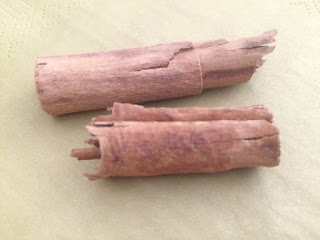 Cinnamon is one of the most flavourful spices and is also my favourite. Cinnamon is made by cutting the stems of the cinnamomum tree. The inner bark is then extracted and the woody parts removed from it. When it dries, it forms strips that curl into rolls, called cinnamon sticks. The sticks are also ground to form cinnamon powder. The distinctive smell and flavour of cinnamon is due to the essential oils contained in the bark.

Cinnamon is loaded with large amounts of polyphenol antioxidants. Antioxidants can help protect the body from diseases. The antioxidants in cinnamon have been found to have anti-inflammatory effects.

Cinnamon is used in cooking and baking across the globe, from flavouring your tea, cakes and buns to making aromatic rice dishes, mulled wine, and delicious curries. 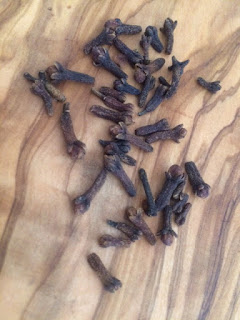 Cloves are the flower buds of the clove tree. They resemble small nails and have a rather warm and sweet flavour. Besides India, cloves are also used in Mexican, European, and Ethiopian cooking.

Cloves are a key ingredient in many spice mixtures made for use in the kitchen. The popular Chinese Five Spice powder has cloves as one of its ingredients. The famous Indian garam masala also has cloves in it.

Cloves improve digestion by stimulating the secretion of digestive enzymes. They are also good for reducing flatulence, gastric irritability, and nausea. Cloves can be roasted, powdered, and taken with honey for relief in digestive disorders. They are particularly useful for toothaches due to their pain-killing properties. 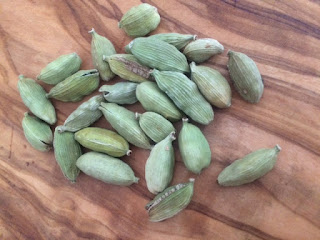 Cardamom is called the queen of spices and is one of the most valued spices in the world.  (Incase you were left wondering who the king of spices is…it is the ubiquitous black pepper). There are three types of cardamom; green cardamom, black cardamom, and Madagascar cardamom. Cardamom pods have a pleasant aroma with a characteristic, slightly pungent, slightly sweet taste and leave a warm feeling in the mouth. It is the seeds, taken out from the fruit, which produce the warm sensation. They are dried fruits of the ginger family.

The smell of this spice makes it an integral part of Indian cuisine. From biryanis to desserts, green cardamom is popular. My favourite use of this spice is flavouring the Indian masala chai.

In India, cardamom has seen a lot of mention in Ayurveda (the ancient Indian science of medicine and lifestyle). It was believed to be a remedy for teeth and gum infections, throat problems, congestion of the lungs, gastrointestinal disorders, and was also used as an antidote for poisons and venoms.

Simply chew on a pod of cardamom after every meal or whenever you need to freshen up your breath! It works!
Kitchen Conversations 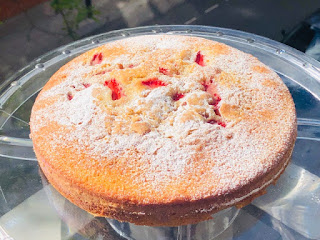 STRAWBERRY CAKE I love bi g ripe juicy strawberries. Who doesn’t! I love how beautiful the fruit is, both taste wise and in appearance, and they elevate any dessert to another level, exactly how you see in this scrumptious strawberry cake. I also  have a small family and am always looking for recipes t hat do not result in a huge cake that could get wasted. This is that perfect small cake recipe you need.  Preparation Time: 10 mins Baking Time: 30-35 mins Makes: A cake for 3-4 people Ingredients 1 cup self raising flour ¾ cup castor sugar ½ cup vegetable oil 2 eggs ¼   tsp lemon zest 1 tsp baking powder ½ tsp vanilla essence ½ cup chopped strawberries or more if you like Approximately ½ cup milk Some powdered sugar A pinch of salt Method Preheat your oven and line a cake tin with parchment paper. In a medium bowl, sift together flour, baking powder, and salt. Add lemon zest. Sprinkle some powdered sugar (about 1-2 tablespoons) onto your 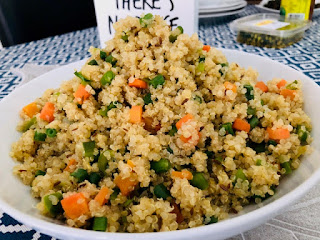 QUINOA PULAO This has become a new staple at our home. It has steadily replaced rice at meals. Quinoa Pulao is healthy, satisfying, and light on the stomach. It is great for a quick lunch or as a delicious side for a fancy dinner. I really enjoy devouring it with my favourite curries. Preparation Time: 10 mins Cooking Time: 20 mins Serves: 4 Ingredients 1 cup quinoa 1-2 tbsp olive oil 3 cups chopped vegetables 1-2 tsp cumin seeds ½ tsp chilli flakes (optional) 1 tsp biryani masala (optional) Salt to taste Chopped coriander for garnishing Method Wash the quinoa well in a strainer and place in a pan with 2 cups of water. Add a teaspoon of salt and bring the water to a boil on high heat. Once the water boils, reduce the heat to medium and cover and cook for about 12-15 minutes or till the water has evaporated. Switch off the heat and leave covered. Heat oil in a pan, tip in the cumin seeds and allow to sizzl 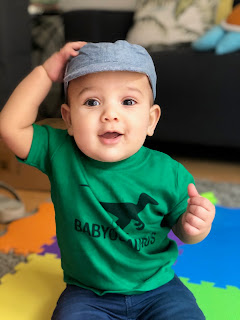 Back to the game

I am sure some of you must be wondering where I had disappeared, why I had stopped posting or why I wasn’t responding to your emails.   Well this little thing is the reason:   Isn’t he absolutely gorgeous? He’s called Ryan and is 8 months. I know its been a while but that doesn’t mean I haven’t cooked or missed all your comments. Like everyone else I am also finding it hard to juggle different things in this lockdown situation. But just to prove to myself that I can multitask like a rockstar I decided to get back to the blog at this time. With Ryan in my life, I have new found interest in cooking for him. So, you are going to find a whole lotta baby meals, basically whatever my little one enjoys eating. Mummies, out there, hope you are excited! So stay safe, safe home and try out my recipes. Cheers Jovi